We can now confirm the new owners of GENERAL VIII as General Marine.   The tug was sold by S.Walsh this week and is now at General Marines moorings at the old Vic Dock entrance in the process of being repainted.

Although we often saw General VIII towing craft for S.Walsh through London’s bridges on a regular basis,  at least it is nice to know that she has been sold to owners within the Thames and will continue to be a regular sight for many of us. 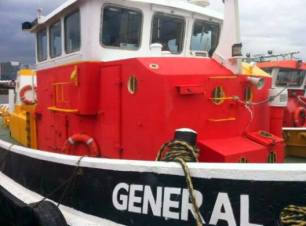